Fan Fest, Tech Show and eight simultaneous visits to the Port: these are the main innovations of the AAPA Latino 2022 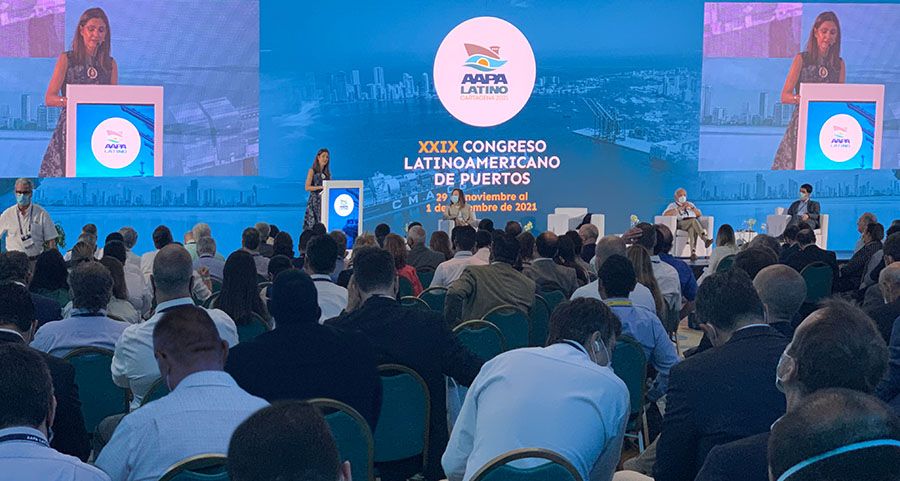 In the final countdown for the event, which will be held between November 28 and 30, the 30th Latin American Congress of Ports (AAPA LATINO) is already taking full shape. With the World Cup spirit as one of its hallmarks, and about 500 attendees already confirmed to be part of what is considered one of the most important port events of the year.

In Santos, the largest port complex in the region and also the birthplace of world soccer star Pelé, the key event of the Latin American port industry is putting the final arrangements in place. Featuring an unprecedented Fan Fest that will offer guests a new atmosphere for socializing and relaxing: there, while they keep up with the AAPA Latino’s program and the conference agenda, they will also be able to enjoy some of the matches of the World Cup in Qatar at the same time.

In total, more than 4 thousand square meters will be set up at the Blue Med Convention Center in Santos to welcome the hundreds of attendees who will be part of this event. So far, among those already confirmed, more than 25 countries from Europe, Latin America, North America and the Caribbean are represented, as well as more than 60 port complexes and maritime and river terminals from the region.

Also, with a "sold-out stadium", the exhibition fair -which this year doubled its booths and spaces- has already completed 110 brands and companies that will be exhibiting their range of consultancy services, equipment, technology and other products of high interest for the sector. Highlights in this area will be four pavilions with port presence from the U.S., Netherlands, Brazil and Argentina, and a Tech Show with high-end innovations for the industry, simulators and virtual reality experiences.

Other major highlights will be the Business Lounges and the Networking Point. While the Business Lounges, to be set up as part of AAPA Latino for the second time in a row, will allow companies to connect with interested parties in a relaxed environment enabling interaction, the Networking Point is a space to hold business meetings with the support of an APP that will facilitate matchmaking between service providers and potential buyers.

AAPA's Latin American Coordinator, Rafael Díaz-Balart, celebrated the high level of interest shown by the region's ports in joining the event and invited other industry stakeholders to take part as well. "The organizers and the host Port of Santos have worked hard to make this a great event, on occasion of our 30th anniversary and with outstanding features, such as its conference program, its new areas and its exhibitors' fair. We hope that more delegations from the port industry of the continent will also join this tremendous congress", he said.

Meanwhile, Zulma Dinelli, the AAPA Latino’s General Director, highlighted the new features and innovations that will add value to a traditional and historic event. "This event has been designed to enable meetings between key players from the port & maritime sector, where all its spaces, the Networking Point, the Tech Show, the Fan Fest and the Exhibition Area, are focused on this: being able to facilitate the interaction among the industry's leaders in Latin America", she added.

EIGHT VISITS AT THE SAME TIME

One of the classic and most expected moments during the Latin American Congress of Ports is most certainly the technical visit, which consists of a tour through the port infrastructure of who officiates as host in each edition of the event.

In the 2022 edition, there are high expectations: the visit will be to the largest port in the region, which transferred 147 million tons of cargo last year and is the main hub for trading essential products for the Brazilian economy, such as sugar, coffee, orange juice, fuel, soybeans, bulk liquids and automobiles. The Port of Santos is connected to over 200 terminals around the world.

The organizers have responded to expectations and arranged no less than eight simultaneous visits on November 28, which will allow -for the first time- more than 400 AAPA Latino attendees to be part of this experience. Upon registration, they will be able to choose between a river tour along the harbor estuary; a visit to Brasil Terminal Portuário, BTP (general cargo); Santos Export Terminal, TES (solid vegetable bulk); or a visit to LDC Juice Terminal (citrus juices), among other alternatives.

In addition to the technical visit, the 2022 event in Santos will include an attractive program of conferences with world-class speakers; cultural visits and other social milestones especially oriented to speakers, attendees and other event visitors, among other moments that will make the AAPA Latino an unmissable experience.

More information about the event, its participants and contents, as well as its different participation alternatives, is available on the website www.aapalatino.com or by sending an e-mail to This email address is being protected from spambots. You need JavaScript enabled to view it..